The suspense is at an end with new floating railway in Wuppertal Mobility for Tomorrow: innovation in the rail industry 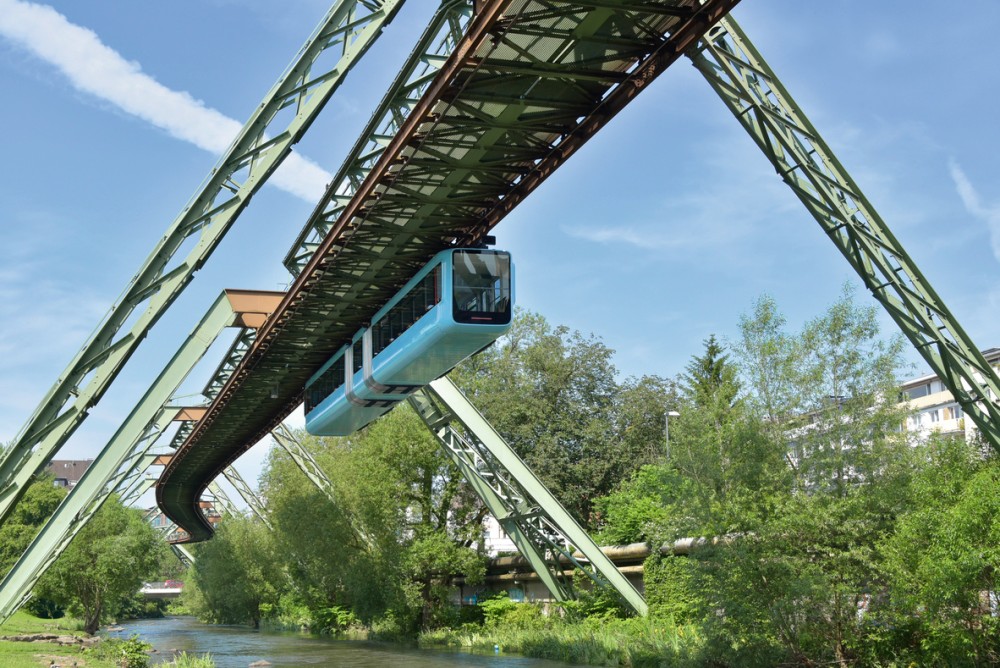 The fourth generation of trains will allow passengers to travel faster and in greater comfort and safety (Photo: Wuppertale Stadtwerker).

To enable passengers to travel faster and in greater comfort and safety, Wuppertal City Works is investing 122 million euros in 31 new modern trains for its Suspension Railway. Schaeffler’s Wuppertal plant – a supplier since the very beginning – has again been brought on board to help make this new railway project a reality.

The task facing the Barmen, Elberfeld and Vohwinkel city fathers at the end of the 19th century was not a small one: to replace the existing horse-drawn trams that would always cause traffic jams in the cities’ narrow alleys, with plans to install an electric railway in the Wupper river valley. However, in such a heavily industrialised, densely populated district, there was no space for a conventional tram system. Then a sugar industrialist from Cologne came along with the solution: Eugen Langen, who had already worked with Nikolaus August Otto on the development of the gas-powered engine, developed the Suspension Railway for what is now Wuppertal – an invention that became world famous. His concept, in which the trains are suspended from the rails high above the ground and supported by rockers, received the go-ahead in December 1894. The major advantage of this solution was that large sections of the 13.3 kilometre route, which stretches from Barmen through Elberfeld to Vohwinkel and back, could be built over the river Wupper, thus following its course as it snakes through the valley. The single-rail Suspension Railway completed its maiden trip in 1901.

Up to 24 million passengers a year now use the railway, which has retained the same route right up to the present day. “The suspended design of the railway places the train’s centre of gravity below its fixing axle and allows it to tilt up to 15 degrees when cornering, and that means it can follow the tight bends of the river at a higher speed than a train on rails,” explains Thomas Kaulfuss, operations manager for the Suspension Railway at Wuppertal City Works. Since mid-December 2016, the City Works are gradually putting the fourth generation of trains into operation following the step-by-step replacement of the tracks – a project that started in the 1990s and concluded in 2014. “The carriages that are currently in use were built in 1972, so of course they are now outdated,” reports Kaulfuss. The 31 new carriages are equipped with high-powered electric motors, robust drive components and a more rigid vehicle body, while LED lighting, padded seats and partial air conditioning in the interior of the train will provide a higher level of comfort for the passengers.

Bearings and components for bogies

The Suspension Railway also has important historical significance. Carriage number eleven will take up residence at the Wuppertal factory, where it may be used as a break room. The Wuppertal plant (which at the time bore the company name Jaeger and was later acquired by FAG) began supplying bearings and other components to the Suspension Railway back in 1901. Parts manufactured in Wuppertal have also gone into the construction of the new trains. Schaeffler supplies both single-row cylindrical roller bearings and double-row tapered roller bearings for the Suspension Railway’s centrepiece: the bogie with its integrated drive system, which connects the cabin and the track. Altogether, the components that Schaeffler supplies to the city’s main landmark represent an order volume of around one million euros and include slewing rings, axlebox bearing housings and axle supports, as well as radial bearings.

Developing and manufacturing these components was not exactly an everyday project either. The Wuppertal plant has a special emotional connection to the Suspension Railway, which not only provides the region with passenger transport, but is also a popular visitor attraction, particularly for families with children. Furthermore, Schaeffler regards it as a showcase for the railway business as a whole, which plays a very important role at the plant: in addition to products for heavy industry, construction machinery and wind turbines, bearings for railway applications make up a significant proportion of the Wuppertal factory’s production output.

From Germany to Australia: a global player in the rail sector

The axlebox and gearbox bearings that are manufactured in Wuppertal every month do their job reliably in every rail vehicle application – be it in high speed trains in Germany and France, in new railways in Russia, China, the UK and North America, or in the heavy duty rail cars that are used to transport minerals and ore across Australia. For this to be achieved, every volume production start-up is supervised by a ‘Launch Manager’ who monitors the entire process, which is based on the specification provided by the application developers at Schaeffler’s Schweinfurt plant and includes everything right up to the finished product. “Based on the product description, we start by defining the operations that will be required in the production process and by coordinating the selection of suppliers and the procurement of components from external sources,” explains Andreas Quint, the Launch Manager in charge of bearing production for the Wuppertal Suspension Railway. “We then move on to the production planning stage and determine the exact schedule. Before a product goes into volume production, we first produce samples that are then inspected by our Quality Assurance department or by the customer directly.”

Some customers will even pay an on-site visit to the assembly line in Wuppertal so that the Schaeffler employees can answer any questions they might have and explain the manufacturing processes and assembly procedures to them. These include the delivery of blanks and heat treatment in the plant’s hardening furnaces, through to mechanical machining processes such as turning and honing that give the raceways their smooth surfaces. Every single railway bearing is then put through its paces in a non-destructive testing procedure: an ultrasonic test is first performed to ensure that the metal is free of inclusions, then a particle testing facility is used to check for cracks using magnetic powder and UV light. “Safety is our top priority when it comes to wheel and axle systems,” emphasises Quint. “This is no less important for the bearings that are used in the Suspension Railway.”

When operating a transport system such as Wuppertal’s Suspension Railway, safety means more than just preventing accidents – it also encompasses reliable operation without component failures that could bring the railway to a standstill. “In terms of availability, we place high demands on our trains, because that in itself is relevant to safety,” points out Operations Manager Thomas Kaulfuss. “For example, if a train gets stuck between stations – that could lead to panic, and the passengers also can’t get off the train.”

The fact that each compartment is now controlled by its own system of drive electronics means it is still possible to continue the journey even if one of the motors fails.

Operations Manager Thomas Kaulfuss: “Each of the new carriages has a bogie with two driven wheels at the front and the back of every compartment. The fact that each compartment is now controlled by its own system of drive electronics means it is still possible to continue the journey even if one of the motors fails.” This was previously only possible using a specially developed emergency propulsion system. Reliable operation is also important for another reason: the railway runs in a similar fashion to a paternoster, i.e. the trains turn around on a nine-metre bend at each end of the track and then return in the opposite direction. The consequence of this is that a single train breaking down is all it takes to bring the entire railway to a standstill.

The new trains have been designed to prevent this happening, and their developers have provided numerous backup solutions for every conceivable scenario, including a safety bar that makes derailment impossible and a mechanism that allows individual wheels to be disconnected from the system if, for example, the gearbox is damaged. A hundred years on, the concept that the railway’s designer Eugen Langen developed is more up to date than ever – even though Wuppertal’s main landmark does not technically “float” as its German name (“Schwebebahn”, or “Floating Tram”) suggests. Of course, the railway’s inventor was fully aware of this, but his words have become a part of the city’s tradition: “It is a system of suspended wagons, and I have christened it the Floating Tram.”