Generating electricity from the ebb and flow 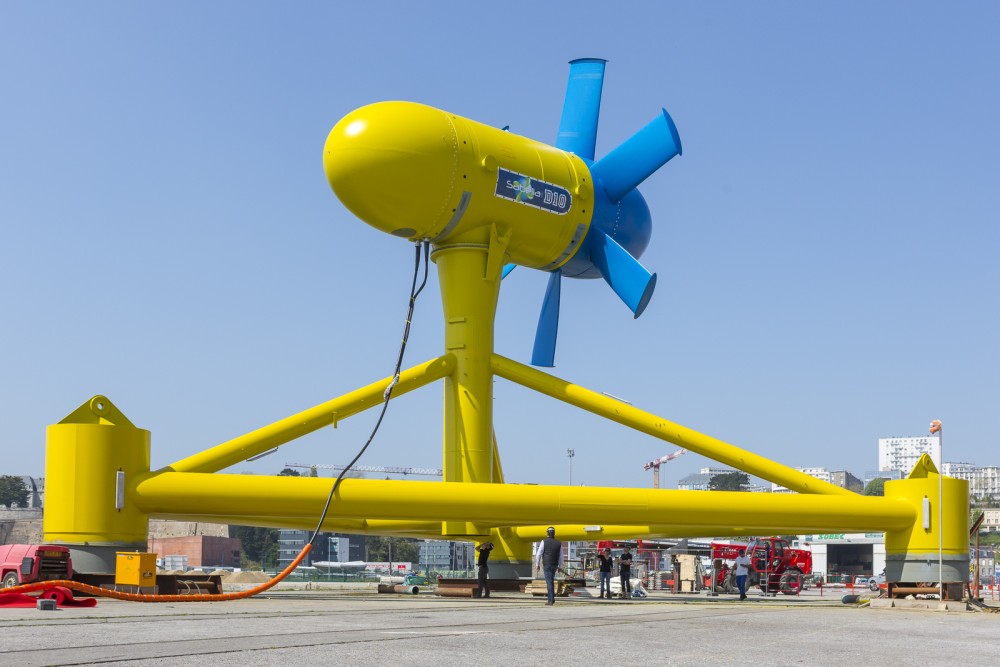 At the test facility in The Netherlands, the sluices on the dam are opened twice a day to let the water flow out of the IJsselmeer.

Not only are tidal power plants invisible, they supply renewable energy regardless of weather conditions. This technology is being tested in countries such as France and The Netherlands – with help from Schaeffler.

It’s only a few steps from Hans van Breugel’s office to the testing facility in Afsluitdijk in The Netherlands. CEO of Dutch turbine manufacturer Tocardo, Hans van Breugel seems to be well known around there: truck drivers pass by and honk their horns at him and he waves back at them. “Once you get on the dam, you have to keep going all the way to Frisia, the entire 20 miles,” he says.

This long dam is part of the E22 European road system that connects the Dutch provinces of North Holland and Frisia. The dam was built in the 1920s to separate the IJsselmeer from the open sea and protect the shoreline from flooding.

“For us, this is the ideal place for testing our turbines,” explains Van Breugel. “The sluices are opened twice a day to let the water flow out of the IJsselmeer.”

The water runs through four turbines that Tocardo has installed right next to the sluice, which runs at a speed of three to four metres per second. One of these, a prototype, has been endurance-tested since 2008. The other three small T1 type turbines are production models with a power of 100kW each. These have been supplying electricity since the beginning of 2015 – and a huge amount of valuable data, which the developers at company headquarters less than 150 metres away in Den Oever can use right away.

Their torpedo-shaped bodies and blades make Tocardo’s underwater turbines look like the outboard engines on large boats. The turbines function in a similar way to direct-driven wind turbines: without the use of gearboxes, the rotary motion of the rotors is transmitted to a generator that produces the electricity. As the density of water is around 800 times higher than the density of the air – depending on the temperature – the rotor blades are considerably shorter than those of wind turbines. Three factors are particularly important to the developers of the underwater turbines: the optimal geometry of the rotor blades to capture as much current energy as possible; the right speed control for all current conditions; and the safe support of the shaft in the aggressive saltwater. Schaeffler worked closely with Tocardo engineers to develop maintenance-free tapered roller bearings that are also clearance-free due to the requirements for seals.

“We have eight years’ experience in the development of this trendsetting technology,” Van Breugel states proudly. “Being under the water, our turbines are invisible and have little impact on the environment. However, the biggest advantage of tidal power plants is that, unlike wind and solar energy, we know exactly how much electricity they produce at any given time.”

Since November 2015, Tocardo has been operating another facility on the Eastern Scheldt barrier in the southwestern part of the country. In The Netherlands’ largest tidal power plant, five 250kW turbines of the new T2 generation are in operation.

A true Colossus on the ocean floor in France

Engineers are also working on other European coastlines to see how the force of the tides may be used to produce electricity. In June 2015, for instance, French turbine manufacturer Sabella installed France’s first ocean current turbine in a strait between two Breton islands. Unlike in The Netherlands, developers here are relying on size. With a total height of 17 metres, a rotor diameter of 10 metres and a weight of 450 metric tonnes, the Sabella D10 is a true colossus. The generator achieves a power output of 1.1MW.

Following the ebb and flow

“We’ve found an ideal site at a depth of 180 feet [55 metres],” reports Erwann Nicolas, Chief Engineer at Sabella. “Here, due to the topography of the ocean floor, the water accelerates to about 13 feet [4 metres] per second.” The rotor and the shaft follow the rhythm of the ebb and flow: they change their direction of rotation depending on the water current. This means high requirements for the bearings, which Sabella purchases from Schaeffler. “These direction changes with low current speeds are the critical moments,” Nicolas explains. “That is why we stop the machine briefly during the changes to prevent bearing damage.”

This does not have a negative effect on the generation of clean electricity. After being grid-linked in November 2015, by January 2016 Sabella had already reported the production of 50-megawatt hours of tidal electricity by its facility in Brittany. By that time, it had already survived the severe autumn and winter storms without any damage. Supported by public funding programs, the manufacturer is currently working on the next generation, Sabella 15, which is expected to achieve a peak output of two megawatts.

At both Tocardo and Sabella, expansion planning is well underway – and with good reason: both companies see the worldwide potential for tidal power plants at 100 to 120 Gigawatt. This corresponds to the output of 70 to 80 nuclear power plants and could someday cover 10 to 20 per cent of worldwide energy requirements. The most important requirement for leveraging this potential is reducing costs, for example, by higher production volumes. “In addition, it is important to design the components with cost in mind,” says Erwann Nicolas. “That is why at Sabella we use standard bearings supplied by Schaeffler. To do this, we even had to slightly adjust the dimensions of the shaft to match the available bearings.”

Hans van Breugel, who plans to launch his third generation of turbines with an output of one megawatt in 2018-2019, is especially counting on Schaeffler’s large product portfolio: “We need a wide range of energy efficient bearings to be able to scale the turbines,” he notes. After all, he wants to install hundreds of new turbines over the next three years, in particular, in the UK and Canada. In 2019, Sabella intends to place two type D15 turbines on the ocean floor as part of a French Government project. In addition, between 2019 and 2020, five D15 turbines off the coast of the Philippines and four identical turbines off the Indonesian coast are expected to start network operation. The production of clean energy from the ocean is therefore entering the commercialisation phase.